Use the form above to find your loved one. You can search using the name of your loved one, or any family name for current or past services entrusted to our firm.

Click here to view all obituaries
Search Obituaries
Immediate Need
We are here to help you. If you have need of our services, please call us, day or night, at:
(619) 583-9511
To better prepare yourself, we have provided you with some helpful information regarding the immediate need process.
Contact Us / Location

Ordering flowers from our site ensures that your order will reach us or the family in a timely manner, and your gesture of support will remain acknowledged in the Book of Memories for future generations. We only work with local florists so we can maintain the sense of urgency and quality of your selections. We thank you for helping to support the family during their time of need, and will fondly remember your kind gesture.

We're sorry but the candle you have selected is currenty in the process of being purchased or has just recently been purchased.

Please feel free to select another candle or check back in 15 minutes to see if the candle you have selected has been released for purchase.

We're sorry but there are no candles available for lighting.

You have already begun a candle purchase session. If you would like to continue with your current candle choice please click "Continue" otherwise please click "Select Another".

In Memory of
Frederick Warren
Arnold
1920 - 2018
Click above to light a memorial candle.

The lighting of a Memorial Candle not only provides a gesture of sympathy and support to the immediate family during their time of need but also provides the gift of extending the Book of Memories for future generations.

In the event that there is an error
in the information presented,
please contact the funeral
home by clicking here. 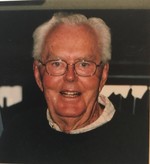 Fred Arnold passed away peacefully on July 5, 2018 in San Diego, California, just days shy of his 98th birthday. He was born on his family's farm along Turkey Creek in northwestern Woodson County, Kansas, on July 11, 1920. Fred was the youngest of five children born to Warren Frederick Arnold and Sarah Melissa Mulsow Arnold. He had a happy childhood growing up on the farm where his father raised crops and livestock and where his mother instilled upon him a love of flowers, nature and gardening. He had dozens of cousins for playmates, thanks to his mother being one of ten children. Things were primitive and times were hard, but Fred always had a bright outlook on life and his sense of humor carried him throughout the years. He would say that on the farm, they got to have a bath once a week, whether they needed it or not.

Fred graduated from high school in 1939 and started his college career at Emporia State Teachers College in Emporia, Kansas. Soon after, he was called to duty in the U.S. Army and served in the European Theatre during World War II. After the war in 1945, he married Margaret McLaughlin in Omaha, Nebraska. Fred had decided on a career in veterinary medicine, so Fred and Marge moved to Colorado and he was accepted at Colorado A&M in Fort Collins. He graduated with a Doctor of Veterinary Medicine degree in 1953 and then practiced in Pueblo, Colorado for a time. In 1956, Fred and Marge packed up their two kids, Jeff and Jill, and joined the move to California, along with several of his classmates from vet school. In 1964, their daughter Jodie was born and the family was complete. He opened his veterinary clinic on Pacific Highway in 1956 and practiced until his 75th birthday. During the 1960's and early 70's, Fred also was the track veterinarian at Caliente greyhound racetrack in Tijuana.

Fred's love of community was evident in all of his involvements. He was a sixty-two year member of the Downtown Lions Club, where he had earned Badge #3. He served as President in 1975-1976 and on many committees through the years. When Fred was introduced at meetings, the room would respond with barking and meowing, much to his delight. Fred always had a great time as the club's Tail Twister, fining his unsuspecting Lions for various infractions. One particular incident: fining all the Coronado residents for thinking they lived on an island.

Fred and Marge were devoted members of Immaculate Conception Church and Old Town became a second home. Fred was active in the many Buffalo Barbecues and Friday night fish fries sponsored by the church. Later in years, Fred and Marge had their own table for Saturday night at La Pinata restaurant. Their date nights continued until Margie passed away in 2012, after 66 years of marriage to Fred.

Fred also was a past member of the Executives Association of San Diego and the Veterinary Association. He was instrumental in the development of the Emergency Animal Clinic in Mission Valley and continued to meet once a month with several retired vets. He also belonged to a great group of guys, calling themselves The Jolly Boys, with whom he made lifelong friendships.

Fred and Marge were so happy in San Diego and would remark often of how lucky they were to live in such a beautiful place. They would spend time almost weekly, sitting by the bay on Shelter Island, eating taquitos and watching the boats go by. Their home had Fred's gardening touch, where flowers were continuously in bloom and the lime and lemon trees were abundantly full. Fred's apartment had a gorgeous view of the bay and his balcony was overflowing with petunias and a tomato plant or two.

Fred got to enjoy watching his grandkids grow up and have babies of their own. Everyone loved Grandpa Freddie and will remember his laughter, caring smile and calm ways. Fred was a loving father to Jeff Arnold, Jill and husband Jeff Pierpoint and Jodie and husband Mike Macalos. His grandchildren are Wade Pierpoint and wife Carie, Jawn Pierpoint and wife Betsy, Ben Arnold and wife Heather, Morgan Arnold, Peter Gustafson and fiance Sara, Paige Gustafson, and Alana Macalos. His beautiful great-grandchildren are Brooklyn, Nick, Jackie and Claire Pierpoint and Andie Arnold. Fred was preceeded in death by his devoted wife Marge and daughter-in-law Sandy.

A Funeral Mass for Fred will be held July 23, 2018 at 10:00 a.m. at Immaculate Conception Church in Old Town, San Diego, California. Burial
will be at 2:00 p.m. at Miramar National Cemetery.

Our world was a great place with Fred in it and will now be a better place because of him. Bless you, Fred.

To send flowers to the family of Frederick Warren Arnold, please visit our Heartfelt Sympathies Store.

This Book of Memories brings those affected by loss together by encouraging communication and self-expression. By giving friends and family a special place to tell their stories and express their feelings of loss, it helps them care for one another during a very difficult time. Click on any of the links to the right to access features or information within this memorial website.